Thank you for visiting my website. As a multi-hyphenate Actor-Writer-Director-Producer, and Podcaster. I’ve tried to make it fairly easy to navigate this site. So please, take a look around, watch a few clips, read a few reviews, or some of my writing samples, and feel free to let me know what you think (but please, be kind — when all is said and done, I am, after all, a fragile actor-type).

And please come back periodically.  I’ll always be adding updates.  Also, if you’re so inclined, please click on the link to my personal blog. I write about everything from the entertainment industry to politics, to sexuality and mental health. It’s my own personal journey, and I invite you to join me, even if only for a brief while.

Thanks for taking a look! 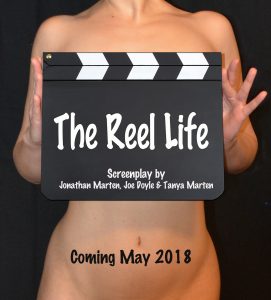 This is the new working poster (until we can create exactly what we want) for our new Soular Films comedy, The Reel Life. Created by me, and with a screenplay by me, Joe Doyle, and my talented and beautiful wife, Tanya (who will be directing), principal photography is scheduled to begin in September, in Hampton Roads, VA. Soular Films is producing this picture in association with Wave4M Studios. I will be tackling my first lead in a feature film (nothing like writing a great part for yourself), and we have been fortunate to have Caroline Sinclair join the team as Casting Director. The casting process is scheduled to begin later this month (May 2017). Look for updates on who’s joining the cast.

The Reel Life is a satire on the film industry, following the exploits of brothers Nathan & Norman Goldstein, successful producers of T & A horror films, as they try to rise above and beyond the B films that have made them so successful. Getting in their way is their antagonism toward each other, as well as everyone else. For more information about the film, just click the link on the poster, which will take you to the film’s page on the Soular Films website.